Flying Blind: Why the Decline of Local News Sources is Detrimental to our Democracy

4 O'clock, 5 O'clock, 10 O'clock. Flick to any of your local television channels during these times and most likely you will find yourself in the middle of a news broadcast. Take it in, you may be witnessing the only form of local news left in your community. The two people behind the desk represent one of the last pillars of local news left in our new media environment. But, why does this matter? Aren't television news channels reserved for the older folks in our lives? Besides, what about the many thousands of news sources to be found on the internet?
Between 2008 and 2019, the number of newsroom employees fell by 23%. While this data is troubling, it only captures a small picture of the decline of local news sources. Around the country, local news organizations are being consumed by venture capitalists looking to make a profit. What they leave in their wake become "News Deserts", areas with little-to-no access to local news sources. These news deserts, much like food deserts, disproportionately impact areas of lower socioeconomic status and areas occupied by racial and ethnic minorities. These communities are then expected to vote on issues they have no ability to educate themselves on.
Why does local news matter? The key to a functioning democracy relies on the participation of its citizens. America has a participation problem which can be explained by many variables. One of the most interesting variables studied by researchers is a general lack of political knowledge throughout the United States. This is especially apparent in local contexts. Do you know who your mayor is? What about your city commissioners? Who is your Sheriff? 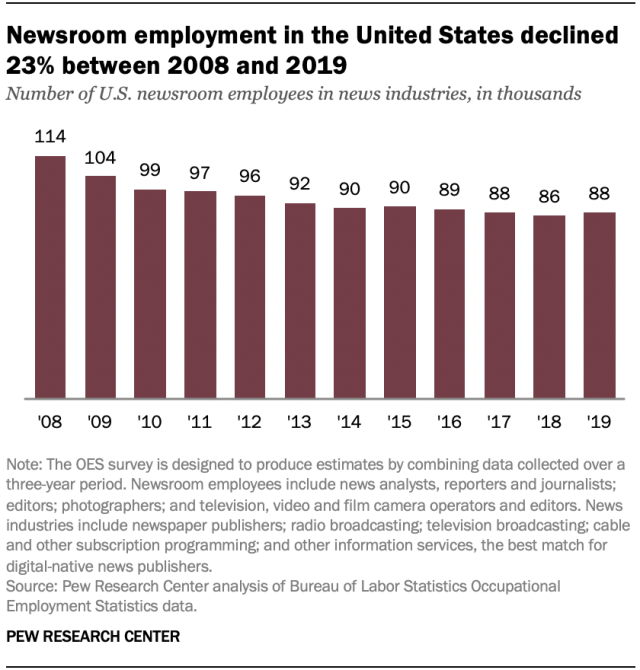 While these political positions may seem trivial, the decisions that these officials make have a direct impact on your life as a member of a community. Yet, folks turn out in extremely low numbers for local elections. However, we can hardly blame ourselves for this lack of local interest. How can we be expected to vote in an election in which we have no knowledge of? The constant overbearing noise of national news organizations drowns out the important localized information we all need. If we do have local news sources they may spend more time reporting on national issues simply because they are more attractive and profitable.
Where does this leave us? It seems unlikely that we will be able to rebuild the local news infrastructure that we once had. Therefore, its more important now than ever to support your local news sources. If you have the means, subscribe or donate to your local news organizations, they may be the last news organization representing your local community.
Other Resources:
https://www.pewresearch.org/fact-tank/2020/04/20/u-s-newsroom-employment-has-dropped-by-a-quarter-since-2008/
https://www.pewresearch.org/fact-tank/2019/10/24/one-in-five-u-s-newsroom-employees-live-in-new-york-los-angeles-or-d-c/
https://pen.org/local-news/
Email Post