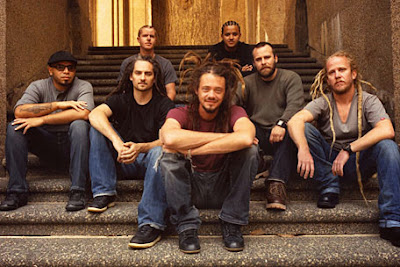 Can music and the environment be related in any way? I think so and heres why. Music has a unique ability. It can reach thousands if not millions of people all over the world. SOJA is taking that privilege and running with it.  SOJA is an eight-piece reggae band from Arlington, Virginia. Lead singer Jacob Hemphill was inspired as a young teen by Bob Marley, amazed at his ability to unite people of different races across different continents striving for peace. Hemphill tries to accomplish this with modern issues. One of the biggest growing concerns over the last fifty years is the issue of global warming or climate change. So like Bob did before him, Jacob wrote songs about the issues of the times.
In just the past few years, SOJA has sold over 150,000 albums. This is quite the accomplishment for an independent reggae band in an age of illegal downloaded music. SOJA has one of the most loyal, persistently growing fan bases in modern reggae music. Today SOJA is one of the worlds most successful reggae bands and has been Grammy nominated. SOJA is famous for writing conceptual albums such as their fifth studio album, Strength to Survive. Strength to Survive was SOJA’s first major album to have success outside of the reggae world. What made their success of this album interesting was its content. Strength to Survive is about the current problems of the environment and address what we can do to fix it. Songs like Strength to Survive, Everything Changes, It’s Not Too Late, Gone Today, Not Done Yet, and Don’t Worry have lyrics that strongly urge us to think about what we are doing to the environment. In an interview with Jacob Hemphill, he stated that the earth is in trouble. He goes on to state that we as humans have been progressing backwards, and that we were a lot smarter a couple hundred years ago when we were living in a way that was sustainable.  Now it is all about consumption and not preservation. It is not about longevity; it’s about how much can I get and how quickly can I get it.
Hemphill has stated on many occasions that he was blessed with a unique gift. “I have the ability to reach thousands, if not millions of people. I want my lyrics to change the world. The only way I know how to do that is through my music.” SOJA’s lyrics on this album are quite powerful. The track with the most powerful lyrics is the title track, Strength to Survive.  Some of these lyrics include:

Does the dollar really matter when our whole world is gone?
Worry about yourself, while the world stills turns
Waiting until we watch it burn” (Hemphill, 2012, Lines. 6-8)

Just consume less,
and giving back more,
And I'll wait, if we don't
We can kiss it goodbye
Our sun, our moon, our earth and our sky
Our world we will recover in a billion years
But if we're not living here (Hemphill, 2012, Lines 17-25)
SOJA has embarked on a mission to raise climate change awareness through their music. Every time you go to a concert or you listen to their songs anywhere you are, you are being reminded that the Earth is in trouble and if everyone can work together we have a chance. Jacob uses his stage presence during shows to take a moment and gives a speech on climate change and how we need to do more to fix it. Even if he only convinces a few people at each show to get involved, it’s a few more than there were at the start.  The environment cannot save itself.  It needs help, and a reggae band from Arlington Virginia is doing their best to help out.
Email Post