The Consequences of Unpredictable Weather


In northern Mongolia, unusual weather locally known as a dzud used to come every ten years, where unexpected snowstorms are followed by nighttime temperatures dropping to minus 44 degrees Fahrenheit. In recent years, dzuds started to occur more frequently and it became very difficult to predict them by locals who have herds of cows and sheep that die in this weather. Those herders have lost their herds because they were not able to use their abilities to predict bad weathers. This could mean that “global warming” might have something to do with it. Observing the behavior of their animals and the growth of the summer grass are not useful anymore. 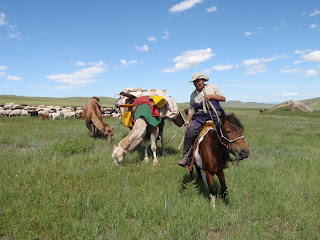 Some herders say that they will have to move their herds more often to un-grazed pastures, and most of them say they will be more selective of their animals. Selling the weak ones and keeping the strong ones that can stand bad weathers. The herder also complain about the rains and how they have changed from gentle rains to intense cold rains, and the water barely penetrates the soil. Although herders have figured out solutions to this issue, they will still be affected by this unusual event. Government involvement in this matter is very important since that Mongolia is very dependent on agriculture and herding.
For more reading:
http://scientistatwork.blogs.nytimes.com/2011/08/01/the-consequences-of-unpredictable-weather/
Abdullah Alarifi
Email Post