Use the sun to cool your house 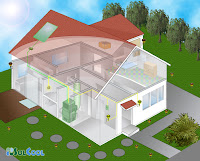 Solar based air conditioning systems are not very new but have become much more affordable and accessible in recent years. There are basically two types: thermal or solar powered. As strange as this may sound, thermal powered air conditioning is a well established technology used for decades in air conditioning for office buildings, hotels, hospitals, and many other applications. Absorption chiller air conditioners are not new, they have been commercially used in the U.S. since the early 20th century and are a very widely deployed technology. They are simple and dependable, using no harmful CFC (Freon, etc.) and some units actually operate without any moving parts. When engineered to run on solar energy, the absorption chiller AC units provide the lowest cost to operate and the best return on investment of any air conditioning system in the world. They are low in operating and maintenance costs. They consume little or no electrical energy - essentially the only parts that use electricity are low amp fan motors and small pumps that move the thermal transfer fluid (Glycol, a food-grade antifreeze) from the collectors(evacuated tube solar thermal panels) to the chiller and then back up to the collectors. Inside the unit is another small pump that circulates the refrigerant. The small electrical needs of these can be provided from solar PV panels if desired. There is no "compressor" to consume power.

The solar powered units are more a hybrid system. They operate like traditional air conditioners but run off of solar generated DC current but can augment energy demands from the electric utility grid. They operate with a smaller solar panel system, and can be anywhere from 50%-85% more energy efficient than traditional models. Some of these systems are scalable with ceiling fans, power ports, and lighting, reducing overall home energy need drastically. More over, some models have up to 12 hour back up battery bank capability, and can store several gallons of pre-cooled water, for operation during power outages.